Southern Utah is world renowned for its majestic mountains and arid natural beauty. When the sun rises and starts to warm the red rocked landscape, the view is inspiring. The horizon develops a warm glow that is unlike anything I’ve seen anywhere else; I absolutely love it.

When I woke up Friday morning to a couple of inches of snow and cold wind, I couldn’t wait to leave for warmer weather.

Chris was already down playing in the Mountain Regional Pickleball Tournament, so I hoped on the St. George shuttle for my quick trip south.

Friday night we ate dinner and played games with friends until I finally turned in at 11:00 pm. I never sleep well the night before a race so when I checked my phone at 4:18 am, I decided to get up and get ready. By 6:00 am I was on the bus headed to the starting line.

Every race is an opportunity to meet new people and run into friends that you know and love. This race I met Rebecca and her hubby Aaron from Illinois. This was their first visit to Utah.

I also ran into a couple of neighbors from back home. These ladies are great basketball and softball athletes. For Olivia and Allie, this was their first half marathon.

At 7:00 am, we took off as the sun was starting to rise; it was a perfect 45°. The race course starts at Highland Park in Washington, Utah and heads south through the city and eventually intersects with the Virgin River Trail. The course features slightly rolling hills and beautiful views. I felt great as we headed south.

Just after mile 4, I started to feel an all to familiar grumble in my gut. After a half mile or so of cramps and nausea, I knew I’d have to make a bathroom stop, and just hoped I could make it the additional mile-and-a-half to the next porta-potty. Just before the 10k split timing mat was the next aide station and my bathroom. I HATE stopping during a race, but sometimes I have no choice.

One time many years ago I was running a 10k in Orem, Utah and had a grumpy gut before the race. Somewhere around mile 3, I realized I needed a bathroom. Porta-potties are usually not provided for a 5k or 10k because the race is so short; so I knew I needed to be resourceful. We were running through a housing subdivision and it was early, so not many people were up or outside.

I saw a man standing by his car parked in his driveway watching us run by. I ran up to him, a complete stranger and asked him if I could use his restroom because it was an emergency. He flat out told me no and turned around and walked inside his house. I was devastated. At first I thought about using his front yard as my bathroom to be mean, but I don’t want to make people sick. I understand that he didn’t know me; I just wish he would’ve had compassion for my situation. It was obvious there was a race happening in his neighborhood with his street covered in runners wearing racing bibs.

I kept on running as best I could but knew I was about to have an accident. I said a silent prayer; asking God to help me find a restroom. I kept running and a few houses later I noticed several cars in the driveway with Ragnar racing stickers on their rear windshields. If they were runners, they would understand my dilemma. Taking a chance, I ran up to their door and rang the bell. When they opened the door I started crying; telling them I needed a restroom and it was an emergency. They were so kind and immediately let me in. They were literally an answer to my prayers. When I have to go, I’ve gotta go. Making it to a restroom in time is a real concern for me.

In the Southern Utah Half, I spent 3 minutes in the restroom, trying to hurry as I felt the seconds ticking away. When I left the restroom, I still felt nauseous but knew I wouldn’t have an accident. Some times Crohn’s disease really sucks. I hadn’t eaten anything that would upset my gut, but my body doesn’t care. As I headed out, I saw the 1:40 race pacer just ahead of me and put all my focus on him. I felt comfortable at a 7:30 pace and switched my racing strategy to just stay with him.

Mile after mile I focused on the beautiful view, what I’m grateful for, and the pacers short brown head and neon shirt in front of me. I didn’t stop at any aide station, I just kept running and stayed focused.

As Bloomington Park’s baseball field lights and Man of War bridge came into view, I looked at my watch and decided to push for a sub 1:40 finish, which I knew would be very close. Sure enough, when I crossed the timing strip, I’d barely hit my goal and headed off to find the restroom. 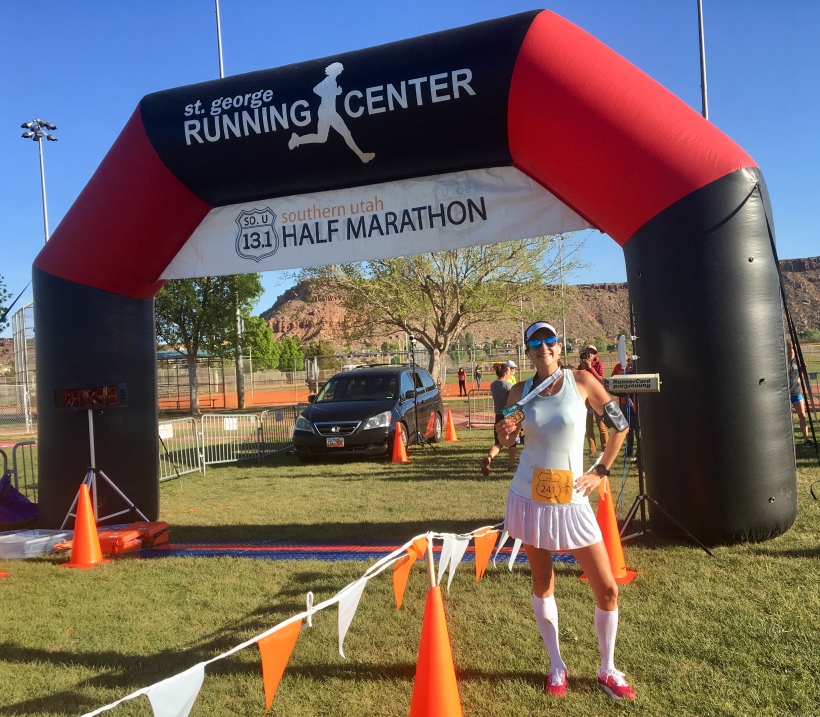 When I learned I placed first in my age group, women 40-44, I was floored.

Last year I placed 2nd in Athena and 3rd in my age group. I opted for the Athena medal to allow another runner who’s not as big as I am, a chance to medal.

This year, I shaved over 5 minutes off last years time on the same course. I’m grateful my consistent hard work is paying off.

Right before the race started, the race directors informed us that this years finishing medal was stuck in customs in Los Angeles and did not arrive in time for the race. Our 2018 medal would be mailed to us after shortly after the race. In order to honor our efforts, they decided to handout last years finishers medal and we would get to keep both.

When the awards ceremony started, the race directors informed us that they were also giving away cash prizes to the top winners. Not thinking much of this, I clapped as others were called on stage, awarded their medals and handed an envelope. The top over-all fastest runners are usually always given cash for winning. 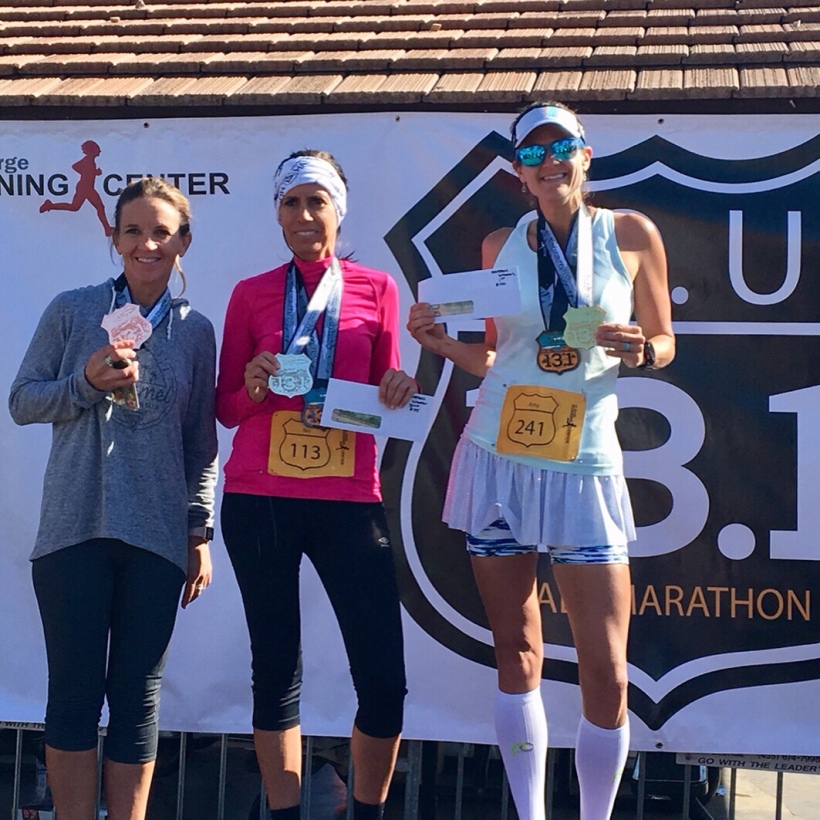 To my surprise, I was handed an envelope with a $100 inside. I was thrilled to place first, but the cash was simply amazing.

Not only have I recouped my race entry fee, the cost of gas to the race and our portion of the Air BNB where Chris and I stayed; Coach Paul informed me the money now makes me a “professional runner,” because I was paid for winning. 🤣 Chris and I had a good laugh at that one.

The funny thing thing is, I feel even more motivated to keep working harder. Coach Paul has some intense speed workouts planned for me. This simple $100 “tender mercy” from the Lord just makes me want to try harder.

My sweetheart heart also had a great Saturday in St. George. After dealing with horrible wind on Thursday and Friday; Saturday featured perfect pickleball weather. Chris and his partner came home with a beautiful bronze medal in the men’s 4.0 double division.

It was a great Saturday to be in Southern Utah. 🏜🤩