Scottish scientist Alexander Graham Bell once said, “When one door closes another one opens, but we often look so long and so regretfully upon the closed door, that we do not see the ones which open for us…” Bell was not only an amazing engineer and inventor, but his repeated failures gave him great insight on how to succeed.

Lately, I’ve realized I’ve been standing in front of a closed door feeling frustrated and occasionally sorry for myself. I wrote earlier about how idiotic it was that I speed-walked a 5k. (You can read about that experience here The Heber Run for Autism 5k)

In reality, I was a little too stubborn to realize what a great gift and opportunity this injury would be. In 10 years of consistent running, I’ve been pretty lucky to stay relatively injury free.

I had a stress fracture in 2013 from ramping up my mileage too fast, and a torn hip flexor in 2014 when I put my right foot into a gopher hole running in a grassy-yard. In the four years since my last casulity, I’ve taken injury prevention seriously and been able to run according to my hearts desire.

Everything changed last year when I age-group placed in a half marathon. My 2017 full-Marathon turned out to be a disaster due to Crohn’s complications but I finally started reaping the benefits of all my training and hard work, when my running times started coming down. Eventually I ended up hungry and careless.

I know a lot of people who run half-marathons every weekend and seldom have injury issues, but my body reminded me there’s a big difference between simply running long distances and actually racing. Too many hard workouts and fast races without enough recovery left me injured and searching for options.

Everything came to a head in May and I’ve been receiving PRP (platelet rich plasma) treatments for over a month now. I’ve been not-so-patiently asking my body to “hurry up and heal” with the focus of getting back out on the road and racing.

Well, a funny thing happened on my way back to the road. A few weeks ago, I saw a posting for a simple trail run race in the local Run 4 Fun group. It offered a 7 mile out and back course and was billed as an easy way to try your hand at trail running.

At first I didn’t think much of the race because I was scheduled to get my next PRP shot the Tuesday before, so there’s no way I could take on 7 miles and have my knee recover. When my doctor called me the Friday before my scheduled shot and informed me they were having supplier issues so my shot would be delayed a week (unless I wanted to pay an extra $500 and go for a different supplier) I was pretty bummed.

After my phone call, the thought occurred to me that if I wanted to, I could now run the race. As running starved as I’ve felt lately, I quickly signed up and decided to go for it. I was excited to run in a whole new place, about an hour north of where I live. When I arrived, I got my bib, met up with some friends and got ready to run. 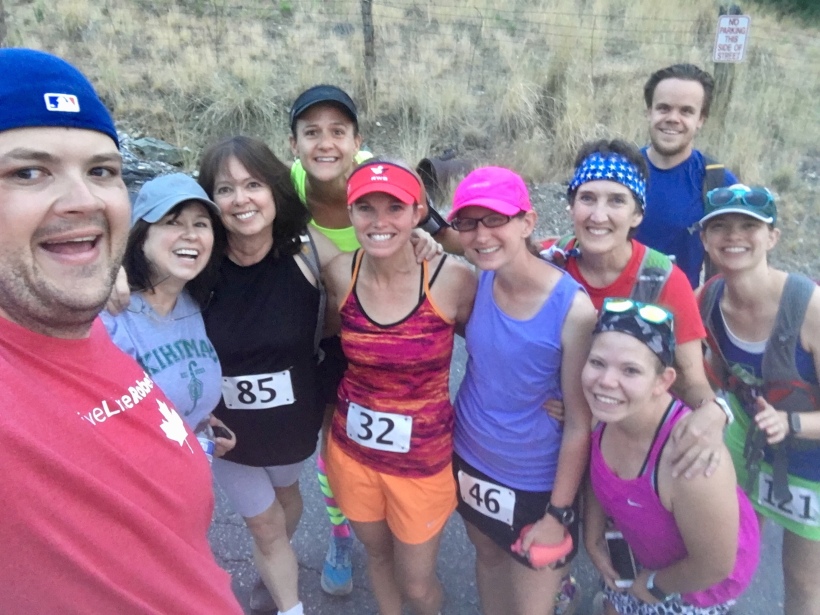 When the race started, I was a little nervous because I didn’t know what to expect. I had no idea what the course was like and because it was a 7- mile run, I didn’t bring any water as I usually don’t need anything for a 7 mile run. 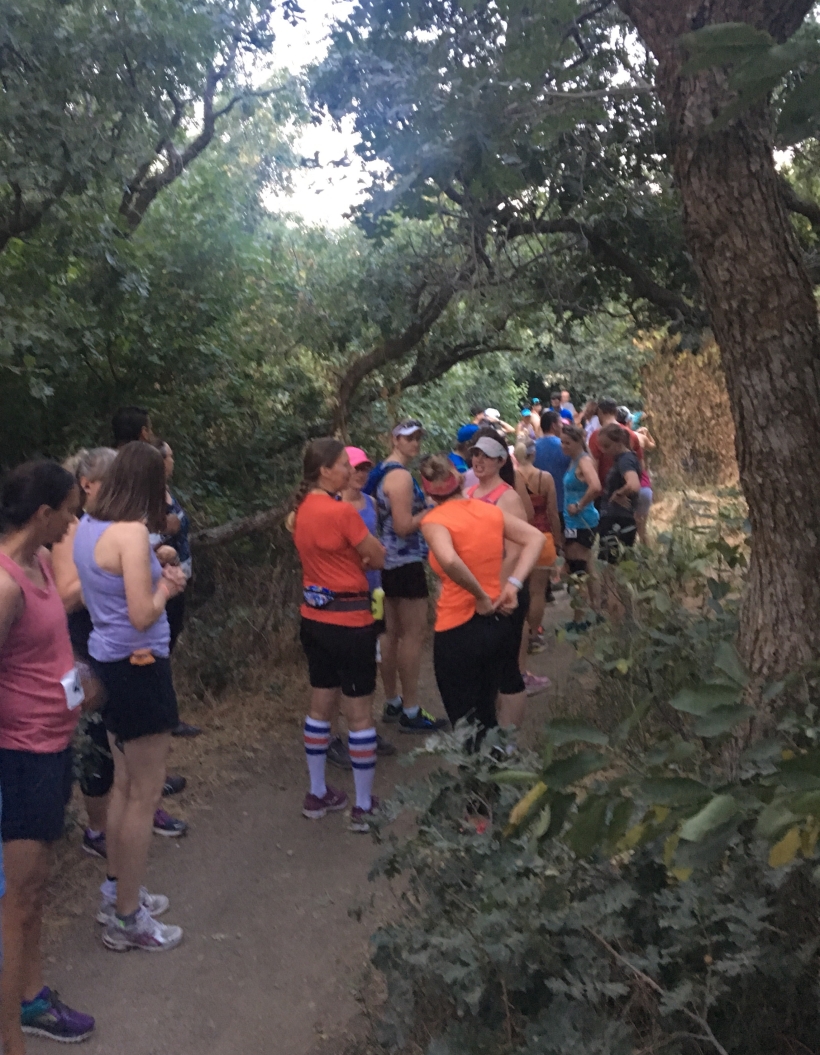 The course was lovely, nearly all dirt with a little gravel that crossed 3 bridges and had a pretty decent quarter mile steep hill. I hit the aid station after 3.5 miles and was surprised at how thirsty I was. I grabbed a drink, went to the bathroom and headed back out. 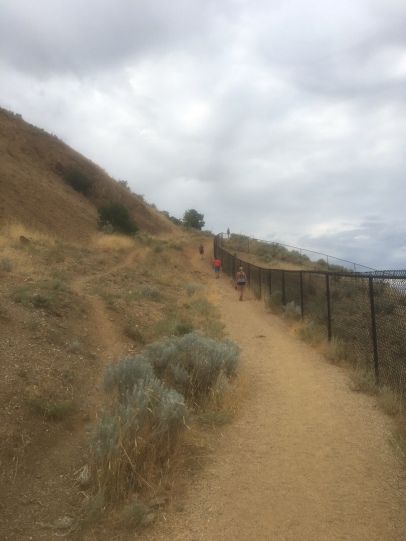 Running along, I saw a lot of friendly faces as I made my way back up the path. I didn’t really have to pay attention to where I was going because there were runners all along the course. 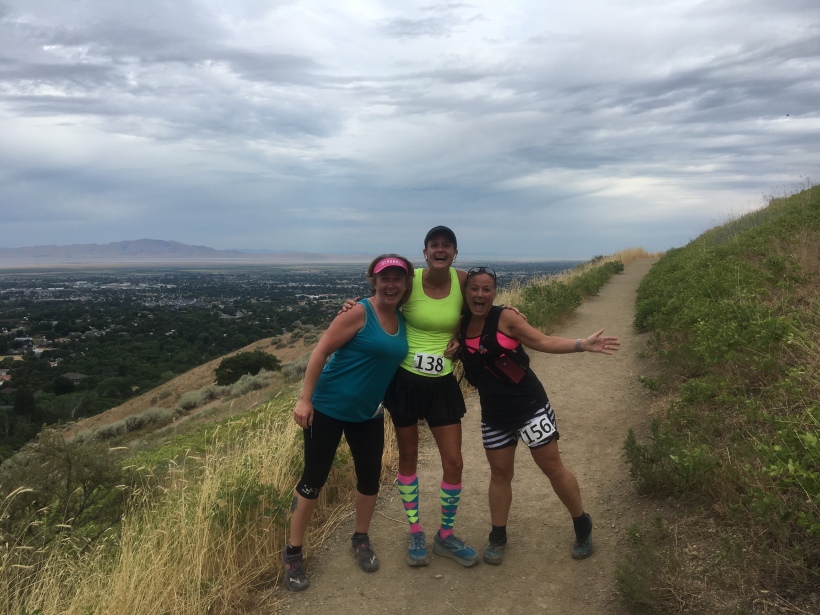 When I saw my friend Josh, I immediately noticed our mutual friend Lizz was not with him. When I stopped and asked where she was, Josh mentioned she was further back and not having a very good day. I took off and decided to go look for Lizz. 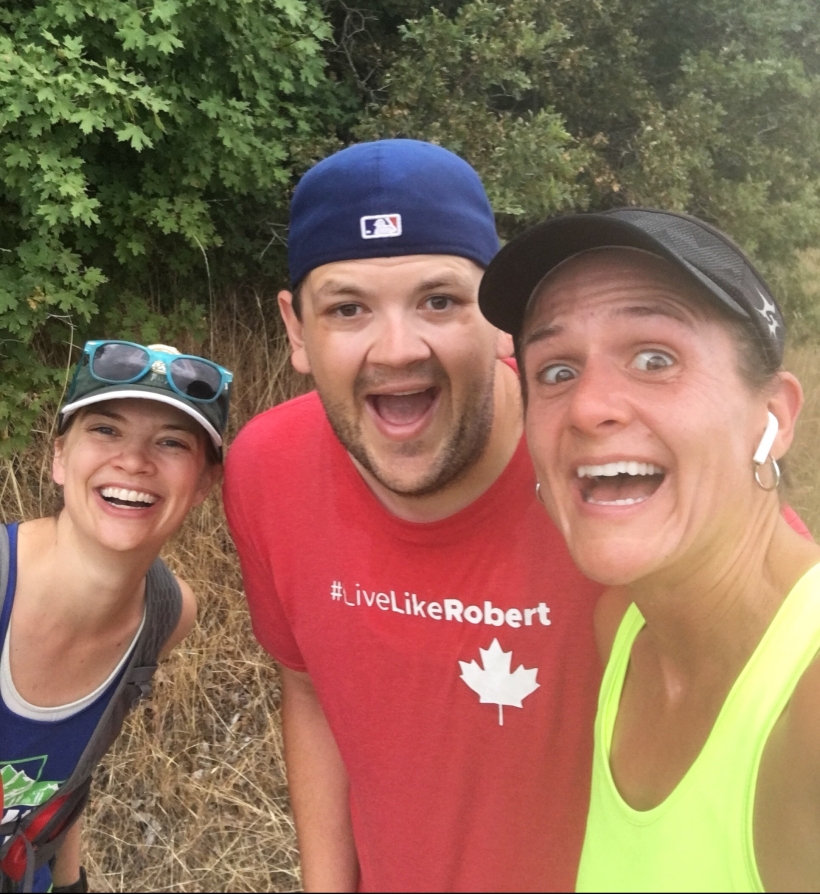 Heading down the trail, I finally saw Lizz, looking very hot and tired and walking by herself. When I reached her, I could tell she wasn’t exactly herself. She was discouraged and very hesitant. I stopped and walked with Lizz, and knew if I could help her make it to our friend Josh, he’d assist her to the aid-station, she could drink, rest and decide what’s best there.

I let Lizz dictate the pace, and we walked and jogged the half-mile till we met Josh and a few other friends. After we met up, I turned around and headed back towards the finish. Following other runners ahead, I made my way to the finish line, surprised at how hot and thirsty I was.

It was a warm and slightly humid morning (for Utah) and I didn’t realize how warm I was without the sun. I got some water and an otter-pop and chatted with a few friends when my thoughts turned back to Josh and Lizz.

Realizing how hot I was and that neither of them had brought water, I decided to head back out and take them some water. Tired from my now 8-mile run, I quickly hiked back up the trail.

What people might not know about me is I like hiking, but I have a TERRIBLE sense of direction. The thought of going out by myself made me nervous but I knew if I followed the trail, I’d be okay. I headed back up the trail and after .60 of a mile, I found myself wandering close to someone’s fenced back yard. I knew the trail didn’t come down this way so I immediately stopped, turned around and offered a prayer for guidance. I realized I had not been paying attention at all to which direction I had been running earlier so I missed several forks along the race route. It was no wonder I got lost. Heading back the way I came, I soon ran into Karen and Mitzy who were also headed out to meet some some friends.

Mercifully, their sense of direction is better than mine and they knew the right way. We hiked and chatted until Karen finally found her friend, so Mitzy and I kept hiking. Somewhere along the trail, we found Josh and Lizz. Lizz was pretty upset and Josh mentioned she’d had a hard week. We offered the water and began the hike back towards the finish. We offered love, kindness and encouragement to Lizz as we all made our way together towards the finish.

We met a few more friends along the route, including the amazing Jaymee who was hiking preggo and totally rocking it. We all hiked and ran together as Lizz crossed the finish line and earned her medal. In the end, the 7 mile trail run ended up being an 11-mile day for me. My knees felt great, and even though I knew I’d be sore the next day, I was completely happy.

It was a great day, and in the end, I learned a few important lessons. First, I need to carry water while trail running. This might seem obvious but I have to be a lot more self-sufficient on the trails because there’s no kind neighbor to intrude on while outdoors. Second, I really need to pay attention to where I’m going when I’m running trails otherwise I might need search and rescue and that sounds embarrassing and fairly expensive. Being lost brings huge anxiety to me, I’m grateful I didn’t have a panic attack.

Third, helping a friend is always a privilege. All runners are newbies at some point. When we’re running a distance we never have, everyone can all benefit from kind guides. While I’m not new to running or hiking, I am new to trail running and I’m grateful I had friends to help.

Lastly, I can’t believe I haven’t trail ran sooner. My family and I have summited the tallest peaks in California, Nevada, Colorado and almost Utah (stupid monsoon- we’ll be back) and have numerous summits 14,000 ft or higher peaks under our belts. I’ve been hiking so long with my kids that the thought of running meant I’d actually abandon them along the trail as their little legs can’t run that fast.

Saturday’s race reminded me that if I’d never been injured, I might not have tried trail running. We’ll always hike as a family, but the thought of running up and down mountains is very exciting! I actually live in a place where trail running is not only a viable option, but has endless opportunities as well. I’m grateful because I think Mr. Bell’s observations about doors was exactly right.

Follow my daughter on her adventures studying abroad in Taiwan!