The Ragnar Relay Racing Series has been around for 15 years now and has grown to include over 19 different racing events in a variety of geographic locations. Even though I have been running for over 10- years, I still had not participated in a Ragnar event. Every year that weekend in June for the Wasatch Back Ragnar always has a conflict of some kind for my schedule, so I pass. 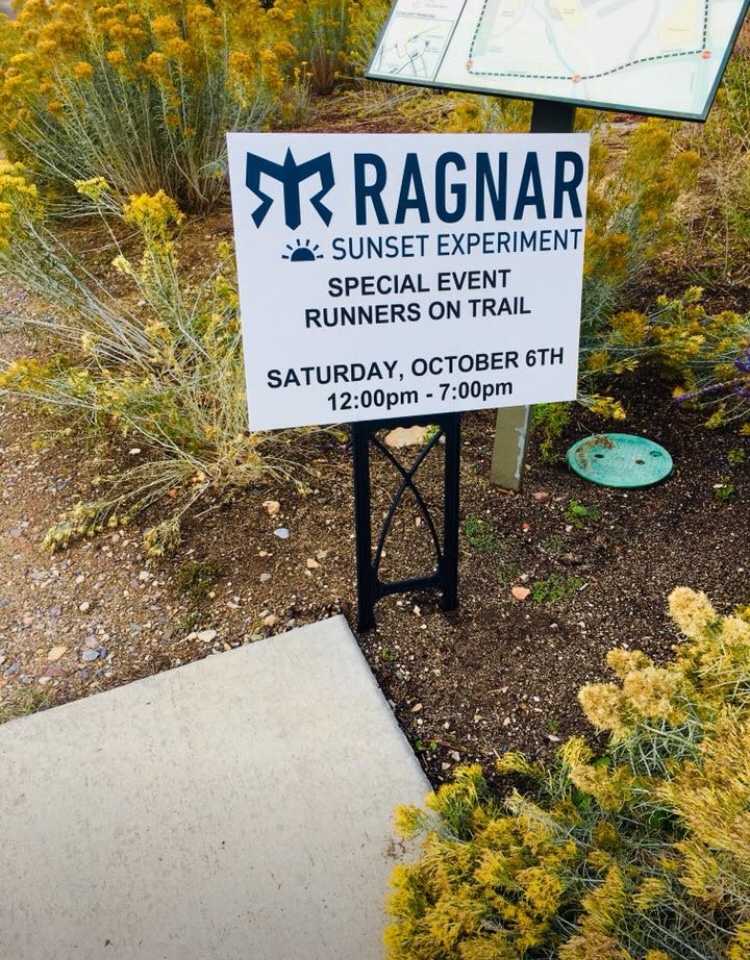 When news went out into our local running community that Ragnar was trying something new, I jumped on the Ragnar-wagon with many local friends and agreed to a new relay racing idea called the sunset trail experience. Essentially, we’d be guinea pigs as teams of 2 or 4 would each run a 6.5 mile trail loop from a preassigned starting time. As long as your team finished their loops by sunset, you’d be a special winner!

Okay, not really a special winner, but Ragnar will give you a really cool medal and t-shirt and you’d get to hang out with some friends for a good portion of the day and even run for an hour or so.

The cost was minimal, the commitment was short and your team could be whatever it wanted. Some teams go all out and really dress up (make up and all) and other teams take a more low-key approach.

I joined team “awkward hat” which received it’s inspiration from a friend who works with the National Forrest Service and her over-abundance of ugly green hats that she really needed to get rid of.

Conveniently, the trail loop actually covered a couple parts of National Forestry Land- making the whole idea an ugly match made in heaven.  This event would be my third trail race this year, so I felt excited to run some new trail.

My Saturday-race day ended being a busy one with limited time due to an unforeseen child’s Ultimate Frisbee tournament. I asked my team if I could run first, knowing I would need to head out early and miss some of the fun. My team graciously assigned me the first leg and I mentally prepared for a trail 10k.

I didn’t really know what to expect as the course was described as both road and trail. We were scheduled for the 1:00 pm starting wave, so I lined up with our team bib, sported my ugly hat and was ready to go.

The first mile was mostly road and a few groomed trails, as we wound along near several buildings, a couple of museums and gardens near the University of Utah campus. The real trails didn’t even really start till nearly mile 2 when we were above the buildings.

I knew we had to go at least 1,000 vertical feet so when the trail started switch backing and gaining elevation, I focused on the lovely view. Mile 3-4 was the toughest with some pretty technical trials. There was  a descent section of natural stairs and rocks big enough it was hard to get good foot placement. The fall foliage did not disappoint.

The apex of the course was just before mile 4 when the trails switched to rolling hills after steady climbing until the last half mile, which was back on the road headed down toward the finish line and transition tent.

Miraculously, I didn’t twist an ankle, or fall even though I gave some very kind race volunteers a good show the last bit of trail course when I caught myself after a pretty convincing stumble. I finished in just over an hour, with an average 10 minute pace. Not terribly fast, but considering the technical parts of the trial, I was satisfied.

I handed off my bib, got a nice little massage, saw some more friends, and headed out to be a mom again with my few hours of Saturday running play over. All in all, I really liked this racing experiment and I think I’ll do it again next year.  I guess I’m finally officially a “Ragnarian.”

Follow my daughter on her adventures studying abroad in Taiwan!